Welcome to Time Machines, where we offer up a selection of mechanical oddities, milestone gadgets and unique inventions to test out your tech-history skills. 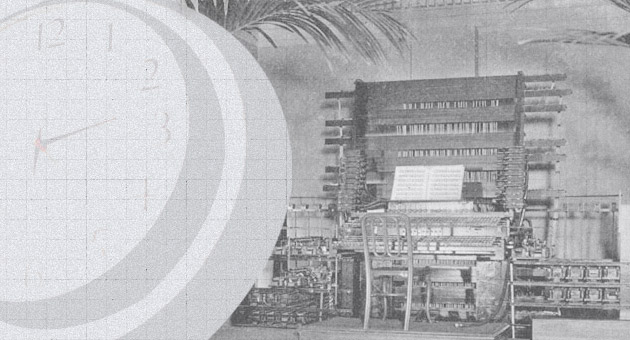 This invention brought streaming music to New York City’s early adopters around the turn of the 20th century. Mark Twain, who was among the first to have a personal telephone line installed, was an avid supporter of the service, which provided the crystalline clarity of electrically generated music delivered into his own home on the telephone wire. Head on past the break to find out the full story. 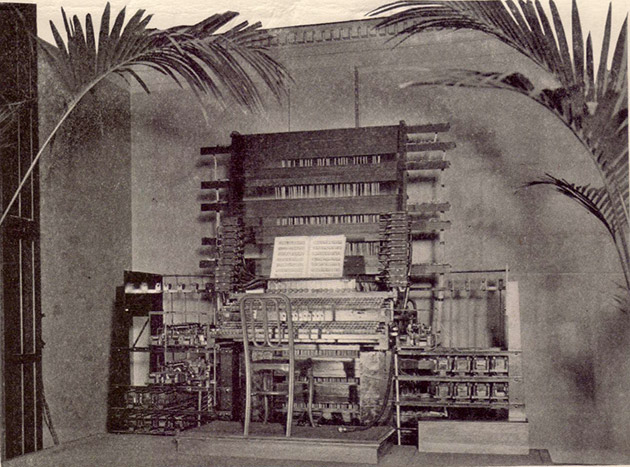 The keyboard at Telharmonic Hall, New York City – circa 1907.

The Telharmonium arrived nearly a century before services like Pandora and SiriusXM began streaming music to homes and devices and almost a decade before radio hit the airwaves all around the world. In March of 1876, Alexander Graham Bell was granted his first telephone patent and in the decades that followed, a web of phone lines spread exponentially across the globe, reaching both businesses and households. Thaddeus Cahill saw opportunity in those wires that went beyond just conversation. It was his grand vision to create the perfect instrument, driven by electricity and capable of delivering music from a “central station” to a multitude of destinations along the growing network of telephone lines.

The Iowa-born inventor showed a spark of brilliance early on, excelling at his lessons and tinkering with various devices in his early teens. In 1891, at the age of 24, he headed to Washington, D.C., to work at his brother’s lab and over the next few years, music was on his mind. He conceived of an electrical device that could mimic the tones of various instruments and saw telephone receivers as a gateway to providing his new form of music to anyone with a connection.

In 1897, Cahill received a patent for his “Art of and Apparatus for Generating and Distributing Music Electrically,” and soon found investors for his “Telharmonium” project. With funding in hand and a deal with a factory in the industrial city of Holyoke, Mass., Cahill began construction of his dream. The Telharmonium’s control center was an unusually complex keyboard, enlisting at least 48 keys per octave, which would trigger sounds devised to mimic the flute, clarinet, oboe and, most elusively, the violin. Powering these electric tones were massive electrical generators; all told, the weight of the machine was around 200 tons. In 1902, the machine would test the abilities of the railway system as Cahill shipped the entire device to its new home in New York City. 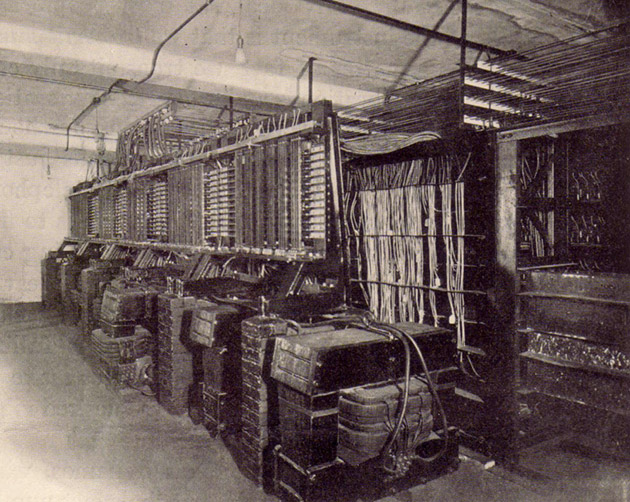 A section of the switchboard and tone mixers in the basement of Telharmonic Hall, circa 1907.

The new location was called Telharmonic Hall and would offer live performances of the instrument, which could be enjoyed in person and by subscription at any of the various restaurants and hotels that had been swayed by this unique device. The heart of the machine was located downstairs, with rooms jam packed with alternators, tone mixers and switching systems. The tones it generated were advertised as “The music of A.D. 2000,” with a technological purity and infinite timbres. Some reports were quite critical, saying that staccatos sounded brittle and sharp, like a tiny steel hammer; lows lacked fullness and the pitch tended to drift. Naysaying critics aside, the Telharmonium’s futuristic sound was a hit when it opened to the public in January of 1907.

The backbone of Cahill’s plan, however, was fulfilling subscriptions and delivering his Telharmonic music to the masses, which proved more difficult than he thought. Wiring subscribers was slowgoing and dealing with the phone companies was a logistical, political and financial battle. It seems the signals he was sending out on the phone lines tended to bleed into phone conversations throughout the area, drawing frequent complaints. On top of that, profit projections for the service, which hadn’t been perfected, were overestimated and failed to cover expenses.

Later, a short-lived financial crisis called the “Panic of 1907,” along with Nikola Tesla’s announcements about the future of radio and wireless, lead to the end of Telharmonic Hall and it was shipped back to the factory in Holyoke. Undeterred, Cahill continued to develop his device. He simplified the circuitry, scaled back the keyboard to a standard 12 keys per octave (by utilizing multiple key banks), designed improved telephonic receivers and increased the efficiency of his alternators so they could run at higher speeds, producing up to 1.57 megawatts in output.

Cahill set up shop again in New York in 1911, but his second attempt fared no better than the first. Wireless telegraphy stations had begun to flourish. Radio had arrived, helped along by Lee de Forest’s audion, a vacuum tube that could vastly amplify signals and provide warm, pleasing tones. It also marked a massive reduction in size for audio devices compared to the Telharmonium. It seems Cahill’s innovation arrived a few years too soon to take advantage of the vacuum tube’s cost- and space-saving technology, but also too late to enjoy a prolonged success before radio’s ubiquity.