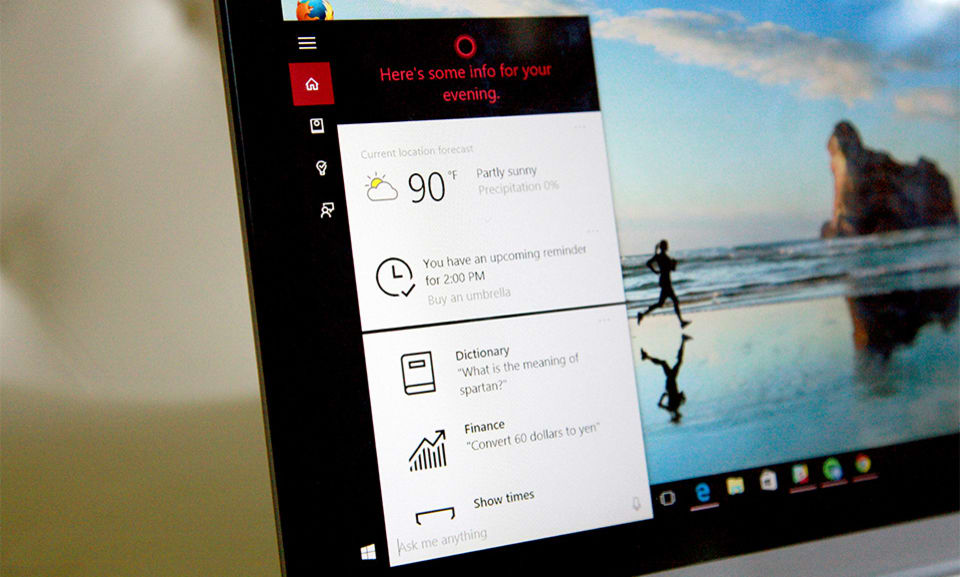 “Hey Cortana, give me a printout of Oyster smiling.”

It’s a joke, couched in a bit of memetic stoner humor, but I couldn’t help myself. After all, Cortana — the digital assistant baked into Windows 10 — feels like a potent mashup of Google Now’s worldliness and Siri’s charm. Scheduling reminders? Check. Opening apps? Done. Proffering weather forecasts? You get where I’m going with this. I was almost surprised that she (sorry, “it”) didn’t humor my lousy attempt at a joke because Microsoft agonized over how to give Cortana a personality, to make it feel like more than just a talented, algorithmic guesser in the cloud. I’ve spent the last week of my life talking to Cortana, asking it harebrained questions along with proper requests, and you know what? The company succeeded, mostly.


Getting to know Cortana

But first, the backstory. Before it took on the name of a beloved Halo character, Microsoft’s digital assistant was called “Jarvis,” a pretty obvious nod to Tony Stark’s computer-bound companion in the Marvel Universe. The idea was to create something that actually worked like a proper assistant who would keep track of a user’s likes and personality and tried to figure out what they needed most at a given moment. Just to make sure they nailed down the whole efficacy thing, Microsoft interviewed actual personal assistants to figure out what made them good at their jobs. Now, nearly three years and a push onto Windows Phone later, Cortana is finally saying hello to users from PCs around the world and those people are starting to say hello back. For many, this will be the first time they could talk to a computer and get a meaningful response back, so… how well does it work? 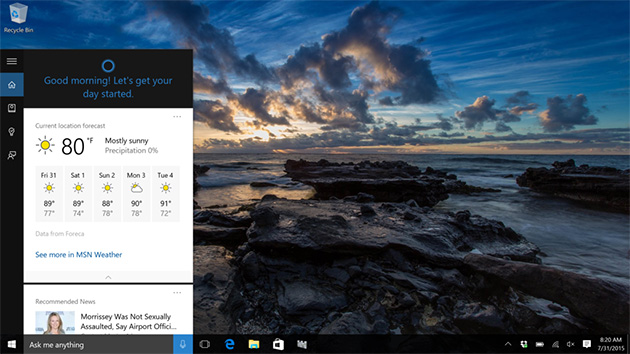 To start, you can peck out questions and queries in Cortana’s search box, but man is that dull. Talking to it is infinitely more interesting, if a little hit-or-miss depending on your hardware configuration. Sometimes it seemed to work just as well with a headset as it did through my computer’s built-in mic, which is to say not always great — for every two or three shockingly well-rendered requests, there was a moment where Cortana would shrug her virtual shoulders and admit it “couldn’t help me with that.” Still, that’s not a terrible hit rate, and it should only get better over time.

Now, if you’re anything like me, the first few moments talking to Cortana will be spent pushing her limits, trying to figure out what she can answer, what she can’t and how weird you can get before she refuses to help. Maybe you’ll even turn on the “Hey Cortana” option to get its attention without having to click a button. Then you’ll start poking around in the Notebook, and that’s when Cortana’s reach really sinks in. 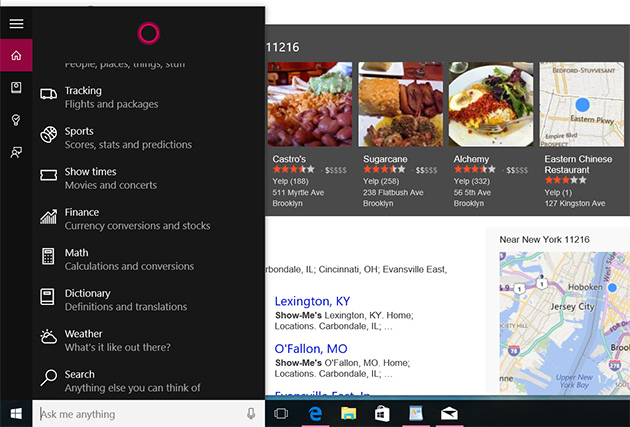 You see, the Notebook is where Cortana stores the tidbits it learns about you, and it’ll conduct a quick interview with you the first time you fire it up to get a sense of what you’re about. More importantly, you can pop in to edit your presumed preferences and add new ones if you don’t want to wait for Cortana to figure them out. Sifting through the options can be a little overwhelming if you’re not used to this stuff — not only can you ask it to display info cards for local restaurants, but also it’ll ask for the kind of atmosphere you dig and how far you’re willing to go. Ditto for what kind of news you like, what kind of events you like to attend and whether you drive or take public transit.

After using it — and your Windows 10 PC — for a while, Cortana will start to suss out the consumption trends that make you who you are and surface news articles and notifications it’s pretty sure you’ll need soon. These will range from reminders to leave in time for your next appointment (using Cortana on Windows Phone has given it an understanding of where I live and where the Engadget NY office is) to flight status if it knows you’ll soon be airplane-bound. Giving up the familiar embrace of Firefox or Chrome might be a tall order, but Cortana plugs into Microsoft’s Edge browser too, so it’ll occasionally surface Yelp ratings and location info for, say, a restaurant whose site you’re looking at. That sort of information is what I wanted when I visited the site in the first place, and now I don’t need to navigate some bistro’s shoddy page. Boom. 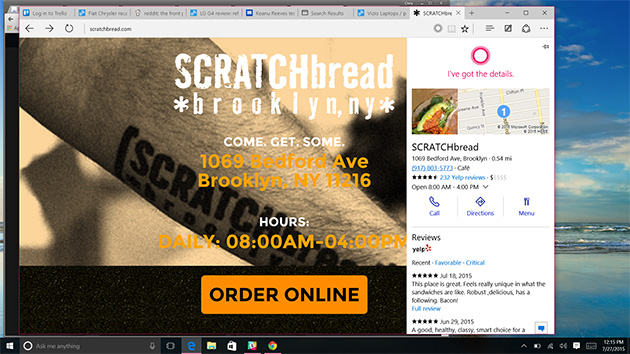 The info cards that pop up in Cortana’s search window and on the web can be terribly useful, but things can get inconsistent when you’re trying to have a conversation with it. Go ahead: Ask it how far away the moon is. Assuming you didn’t mush mouth your way through that sentence, Cortana will cheerfully fire up an info card that confirms, yes, it’s 238,000 miles away. Ask the same question about the sun, or Venus, or Mars, though, and it just opens up a web browser window with the correct Bing search results. Oh, and asking how far away Neptune was yielded an info card with three Neptune-themed diners nearby in Brooklyn. Erm, nice try?

The thing about natural language processing is that it takes so much context and power to chew on what we’re saying and respond appropriately that it’s still basically impossible for Cortana to tackle every request the way we’d like her to. When Cortana doesn’t quite know what to do with your query, it does something you’ll soon become closely familiar with — it opens a browser and searches that exact phrase on Bing. Even seemingly straightforward requests you’d think Cortana could handle, like “show me restaurants around here,” get punted out to Bing instead of getting processed to highlight results right in the search window. Cortana, you know more or less exactly where I am, and I’ve told you what kind of food I like; why can’t you figure this out for me? We’re told Cortana can handle even more complex feats — like throwing up a flag when you try scheduling a meeting at a time when you’re usually somewhere else — but it takes time to build that sort of personal awareness. 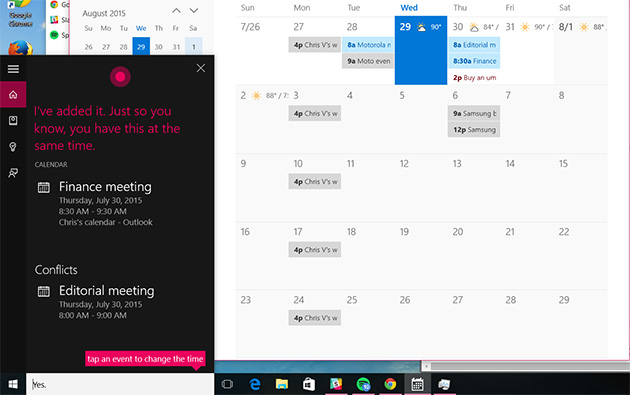 As frustrating and seemingly illogical as those situations can be, the Cortana we’ve got today won’t be the one we chat with in a few weeks or a few months. Since Cortana is so closely connected to Bing, any improvements in how Microsoft’s search and instant answers work will reflect in her behavior — long story short, Cortana is still growing. And here’s the bit you should really remember: Cortana sometimes just nails it. For me, that first “wow” moment was when I wondered aloud what the weather was like in Manhattan (disgustingly hot with a chance of rain), then asked it to remind me to buy an umbrella (success!) while I tugged on my shoes.

At the risk of sounding ridiculous, it felt like the sort of slice of life a well-paid ad exec would stick in a promotional video. I was that guy. When Cortana recognizes what you’re saying and fits all the little contextual action bits together, it feels like the future is finally being more evenly distributed. This first taste of Cortana can be surprisingly useful, and even a little thrilling, but it just makes me yearn for more and better conversations. Show us what you’ve got, Microsoft.

Talk about the Microsoft Windows 10 with other people who own it too!