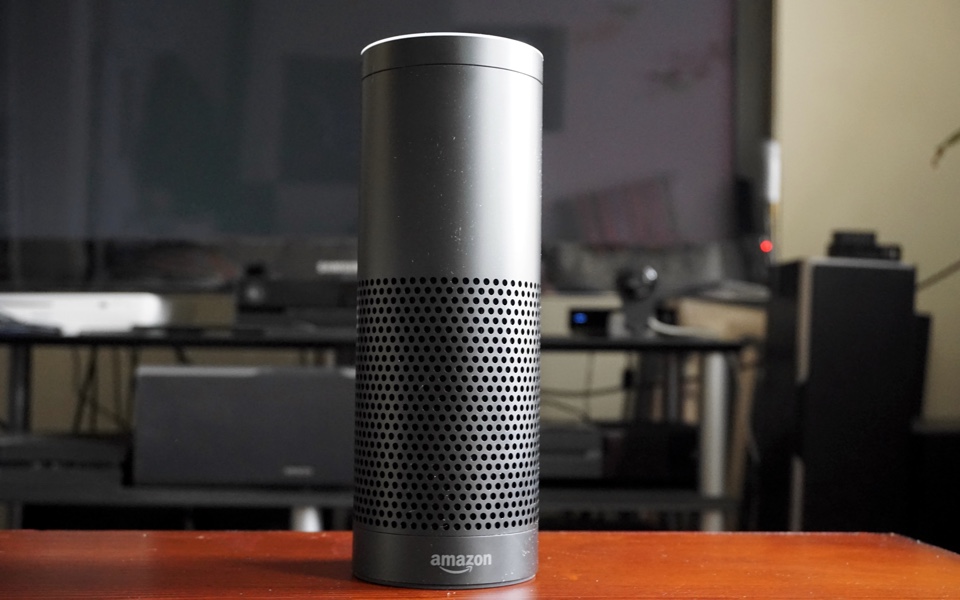 After the failure of the Fire Phone and the so-so Fire TV, it was hard to get excited about Amazon’s $180 Echo wireless speaker. At best, it seemed like a superfluous device that simply mimicked voice-powered tech from our phones in monolithic speaker form. At worst, it felt like yet another way for the company to insert itself into your life — all in an effort to make you buy more crap from Amazon. I’ll admit, I wasn’t in any rush to nab an Echo of my own after it was first announced (Prime members with a special invite were able to get it for $99). And, curiously, Amazon didn’t make review units available at the time, either. But now that Echo is widely available to everyone, I was finally able to get my hands on one to test out. Surprisingly enough, I ended up falling for it big time.


Living with the Amazon Echo

To be clear, I fell for Amazon’s virtual assistant Alexa. Sure, she’s just another spin on the likes of Siri, Cortana and Google Now (time for a friendlier name there, eh Google?), but Alexa also differs in a few key ways. For one, she’s always listening, and she generally does a better job of understanding me than other virtual assistants. Alexa also has the uncanny ability to hear me even when I’m on the other side of my living room, thanks to Echo’s seven microphones. That’s something I’ve never seen with any other virtual assistant. (I even have trouble getting Siri to wake up and accurately hear my voice on my Apple Watch — and that’s right on my wrist!)

All of this is due to Amazon’s unique approach with the Echo. It’s not a portable speaker like we’ve seen from Jambox and Logitech. Instead, it’s a rather large, cylindrical device that needs to be plugged into power. It’s something you’ll likely just leave in a single spot in your home. But what you give up in portability you gain in overall reliability, as Alexa is ready to listen to your commands at the drop of a hat. After all, it’s harder for battery-powered devices to always be ready for voice commands without slowly draining power (Motorola went to great lengths to make that possible on the Moto X). 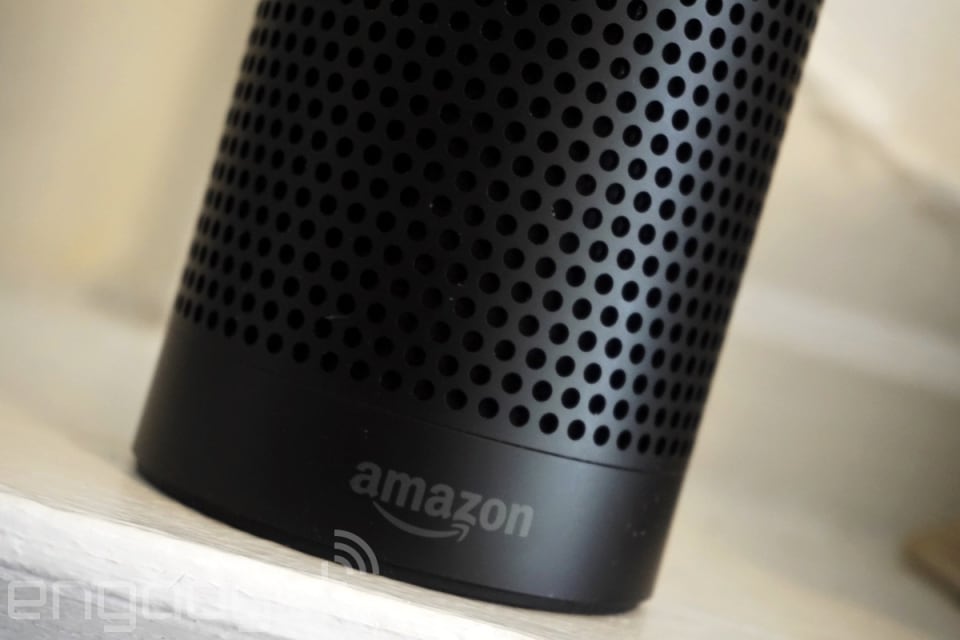 As someone who’s tied to a smartphone, tablet or computer most of the day, it was tough for me to get the hang of the Echo initially. Most of its functionality, like asking for the weather, checking on my calendar or looking up facts, is comprised of things we’re all used to doing on plenty of other devices. But eventually, its hands-free access to information began to feel downright empowering. If I’m on the way out the door, or in the middle of making dinner, it’s far easier to shout commands to Alexa rather than try to activate Siri on my phone, or load up an app. Alexa is the first virtual assistant I’ve used that actually lives up to that title.

It also helps that learning to use the Echo involves far more delight than frustration. Alexa has her limits, of course, but she also ended up consistently surprising me with her capabilities. I learned that she could tune into my local NPR station just by asking her to “play WNYC,” which pulls in a stream from TuneIn. Once I linked my Pandora account (through the separate Echo mobile app), it was easy to start playing any of my saved radio stations, or any random Pandora channel. And Alexa never failed to resume whatever I had playing whenever I interrupted her to ask a question.

Echo also shines as a decent speaker for music listening. Amazon packed in a 2-inch tweeter, a 2.5-inch woofer and an elongated reflex port in Echo’s 9-inch tall frame, giving it enough power to fill a small room with distortion-free music. It’s certainly no match for a dedicated hi-fi setup, but it’s about on par with Bluetooth speakers in this price range, with thumping lows and crisp highs. Don’t expect it to capture the nuances of a good jazz or classical performance, though. Echo’s circular design is reminiscent of Logitech’s UE Boom lineup, allowing it to spit out sound in every direction.

You can connect Echo to any mobile device over Bluetooth, after which it’s recognized just like a typical Bluetooth speaker. There’s also some basic hands-free support, allowing you to use voice commands to have Alexa do things like pause and skip media tracks. Unfortunately, Echo doesn’t work as a speakerphone yet, but that’s something I’m hoping Amazon adds eventually. Its complex array of microphones and noise-canceling technology would make it pretty useful for phone calls. 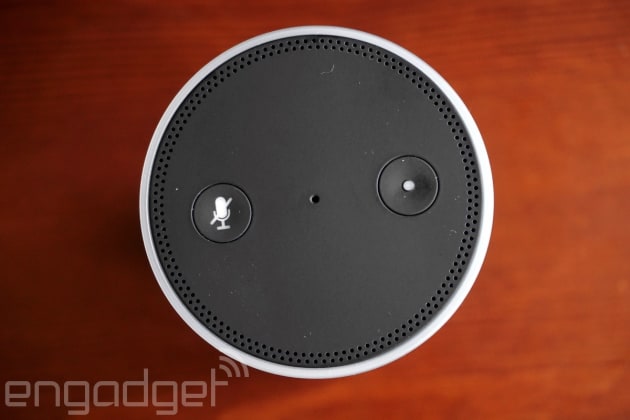 On top of the functions mentioned above, Echo can also do things like set a timer or alarm; play music from your Amazon library, Prime Music and iHeartRadio; and play Audible audiobooks. Echo can also control WeMo and Philips Hue smart home devices, but I wasn’t able to test that functionality since my home isn’t very smart yet. You can also add items to a shopping list and even re-buy things from your shopping history with voice commands. To Amazon’s credit, Echo offers enough other compelling features that it doesn’t feel like a crass e-commerce Trojan horse in your home, lying in wait for your late-night impulse purchases.

I probably sound like a pretty big Echo fan by this point, but there are still things I hope Amazon improves on eventually. It’d be nice to be able to activate Echo with your own custom voice command, other than saying “Alexa” (or “Amazon,” which is just boring). Amazon also needs to add more services to make Echo more useful — it kills me there’s no Spotify support yet. And while I can understand why Echo has to be plugged in, it would still be nice to have a small battery built in to give us a few hours of portability. As much as I like Echo, its current $180 price tag (down from its original $199 non-Prime price) also seems pretty steep, especially when select Prime members were able to snag it for $99.

The good thing is that the company is constantly updating and improving Echo. I didn’t run into any of the voice-recognition issues that earlier reviewers saw, which makes me think Amazon wasn’t just twiddling its thumbs for the past few months. 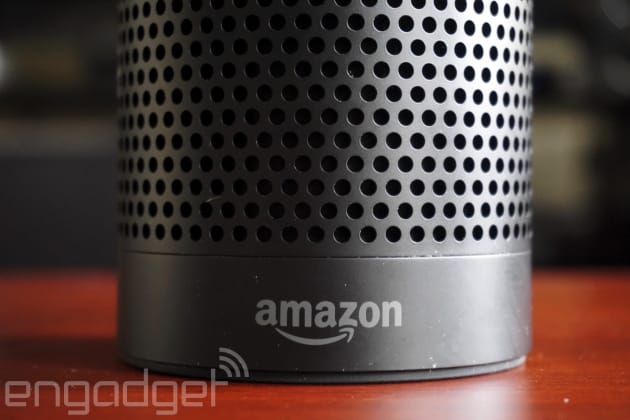 Perhaps the biggest compliment I can give the Echo is that it just works in a way that Siri and Google Now don’t — at least, when it comes to actually listening to and understanding voice commands. Once it’s plugged in, you just need to learn the basic Alexa commands and you can start feeling like a pro Echo user. It’s also pretty clear that Amazon is committed to making Echo a compelling platform. It just announced a $100 million Alexa Fund to promote voice-powered apps, and it’s offering an SDK that will let developers bring their apps to the Alexa platform. Echo may have just seemed like a weird speaker gadget when it was first announced, but it might just end up being as transformational as the Kindle over the next few years.

Talk about the Amazon Echo with other people who own it too!